Blessing of the Waves, Surfboards and Feet 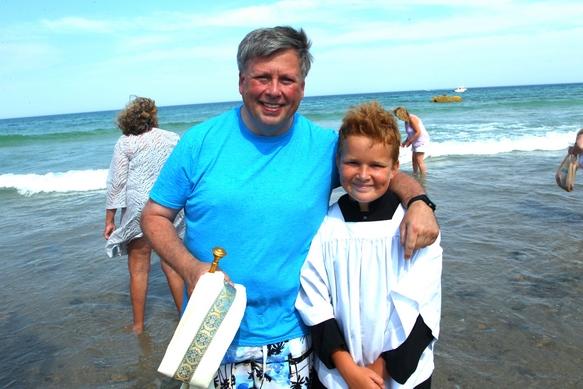 I was very blessed to grow up in a devout Catholic household. My family lived a block away from the parish school and two blocks away from the church. I had the unenviable situation of living perpendicular to the convent. and thus having another ten mothers! I grew up in the sixties and the seventies and every Sunday all the neighborhood families would attend Mass. My maternal grandparents were from Ireland and as second generation Irish I have come to know many of the customs and traditions. One of them was to travel to the beach on August 15th to have your feet blessed and if necessary – healed. This day was also the Feast of the Assumption of the Blessed Mother into Heaven. I thought it was kind of neat to get to leave Allston on that day for a trip to Hampton Beach, and perhaps a clam roll and french fries at Browns Seafood in Salisbury, Mass. on the way home.

Only 30 people attended this blessing, and while feet, waves and surfboards were blessed, the truest blessing came from the heart of a young 10 year old boy.

A few years ago I replaced (now retired) Father Don Clifford, pastor of the neighboring parish, with the Blessing of the Fleet. Each July the Marshfield Fisherman’s Association puts together a Blessing of the Fleet and invites a local clergy member to preside. (Visit my Instagram account for the pictures). This year’s event drew a larger crowd of boats and I had several altar servers join me on the town pier. I imparted repeated blessings on each boat, while the kids used the holy water sprinkler to anoint the boats. We had a great time, and it was nice to see how much the boat owners desired the blessing.

This year I decided, rather last minute I might add, a Blessing of the Waves event.  The event was captured on film by the wn, but we forgot to invite any of the altar servers. The day of the event we got through to the Engren family and asked them if Charlie could join us, they said they couldn’t attend as they had committed to a family cookout out of town. About twenty minutes later someone knocked on the rectory door. Who came walking into the rectory but Charlie and his mom. Charlie said to the pastoral associate that he felt bad about declining the opportunity to be at the Blessing of the Waves, and changed his mind, because he said, ” if I asked Father Carmichael to help me with something, he would do it in a minute, so I want him to know I’d do the same for him, and he can count on me being at the beach.” Charlie’s parents, family and ccd teachers should be pleased that they have given this 10 year old a solid foundation as a disciple of Christ. As the paper relates, only 30 people attended this blessing, and while feet, waves and surfboards were blessed, the truest blessing came from the heart of a young 10 year old boy.

As I look back on the special times I had growing up in a church community at Saint Anthony’s in Allston, and the fun trips to Hampton Beach and Brown’s Seafood Shack, I am so thankful that God gives chances to each of us, like myself and Charlies, to glorify Him.